Which female player turned pro when she was fourteen and then finished the next year ranked in the top twenty?


Martina Hingis. She still holds some of the youngest-to-do-this-and-that records and she also held Number One for about four years.

This rocket-like ascent at such a young age may have led her to say things such as she did once to Lindsay Davenport during a coin toss, ”Do you want me to serve or break you?”, according to Beyondthe Baseline. How about this in regard to her friend and doubles partner, Anna Kournikova? “What rivalry?” she said. “I win all the matches.” 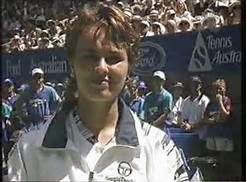