The gentleman to the left, Father Time, usually shows up this time of year.

One can usually find him in cartoons, editorials and even some greeting cards.

Well, I'm accustomed to this and it truly doesn't remind me of much other than the coming new-year (which is wonderful), but then I stumbled upon the following picture along with the caption:

Older Players Handing it to Some Whippersnappers 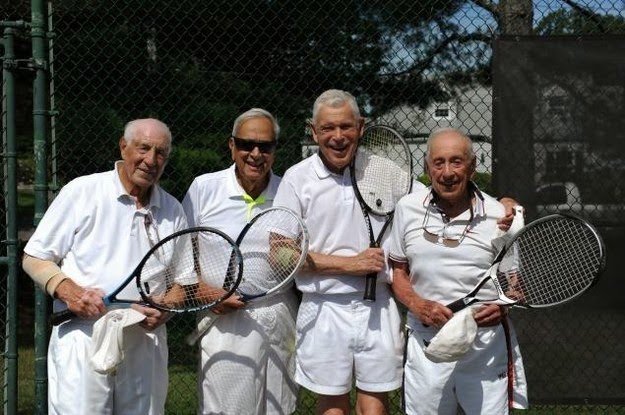 Many of you may remember being a freshman or sophomore on a high school or college team. You may have been in equal shape or possessed the same speed and agility as the seniors, but they probably had something you didn't - more experience, perhaps greater wisdom on the field or court of battle.

If you didn't play on school teams, but community leagues or even around the block or at a park in your neighborhood, you still probably noticed something taking place with the older kids, something you had to overcome, even when size was of matter and you were about par with your opponents in such regard. Relatively, they probably had more game time and we are only talking about just a few years difference in most cases.

In either case, even the seemingly slightest difference in age and experience may have given your elder (relatively speaking) the finesse and guile to place your skates on thinner ice, pump more air into your air-ball or put that extra oomph (long shot - OUT) in your tennis game.

Again, we are only talking about a few years age difference here. Let's take this to a different level and say we have a twenty, thirty or even forty-something playing league or tournament tennis against someone of similar rating in their fifties, sixties, seventies or even the age of Father Time. Things can get pretty ugly...for the young(er) whippersnapper.

It is so entertaining to watch some young athletic 3.5 player(s) with shreds of his or her mental and emotional fiber scattered all over the court in pools of sweat and tears as some geezer (or two) slices like a Manhattan deli butcher and hits targets with the precision of a Tomahawk cruise missile, all the while looking cooler than Sinatra at a Vegas cocktail bar.

Oh, I've been there, but after hearing myself say, one or two times, what I've heard so many others say, so many more times, I decided to start playing a more well-rounded and smarter game of tennis. I've heard the excuses before and so have you in so many forms:

As you probably also realize, none of the statements (pleas for mercy) are said in admiration or even with a hint of respect, but usually with a dash of desperation or disgust for the opponent(s). "No. It's not my fault I'm losing this match."

Now, unless I missed something, all the above statements don't reflect, even barely, upon anything outside the rules and regulations of tennis, so I imagine all the shots, techniques, strategies, etc. are legal. Of course they are. So what's going on, I think, could be summed up in the following statement, particularly by someone who has a decent amount of match experience:

"My games too good. I don't have to play against this crap." Well, it's not crap and you don't have to play against it. You can whine, put your racket between your legs and walk off court. No opponent would object to this, particularly in a league or tournament match or one that has something better to do, like play a challenging opponent or taking a win and watching other more interesting matches.

Or, you could work on having a more well-rounded tennis game and quit assuming you are suddenly at some level you watched on television. In fact, if you wish to see less of this, challenge yourself even more and rise from this level of play to one where it is less likely to occur.

Oh, this crap, as one may so reflect, has probably aged longer than the finest of wines and marinated more deeply than the most savory of steaks - you just have a lot to ketchup to.

That crap is called effective tennis and if you don't adapt and learn to play against it, it's referred to as winning tennis in your case.

The point being, you are making these shots and strategies more possible and probable because you probably aren't bringing any decent shot selection, strategy or execution to court yourself. You and/or your teammate are making these things possible and you are being exploited. Oh, you are most likely thinking your opponent is wanting to play the match your way. Oh, you are not thinking.

And don't get too caught up on this whole seniors thing because their tennis game may be more vibrant than your last dinner date and they may be looking at you as a little schoolgirl or schoolboy in knickers simply needing a good on-court spanking.

These so-called geezers probably didn't start playing a fortnight ago and when they notice you have pooped your emotional diapers and are looking for a mental pacifier, they may just send you begging Mommy for a blanky.

And, if they are playing league at your level or in a tournament, they made the decision over playing golf, bridge, pinochle and shuffle board. This should concern you.

There are so many strategies to playing seniors and I hope to write a book about it because I hope to be playing then and until the day before I die. As much as I love tennis, I don't wish to die on a tennis court.

Until then, they are the masters. You may want to think of senior as being synonymous with experienced, beguiling. So show your respect or you may be forced to.

Also, out of respect, please don't call a senior a Geezer unless he or she has given you permission prior. He or she may give you something else to overcome...off court. I've seen it happen.

You may have noticed the young one in the picture above is being schooled by Father Time. Will this happen to you? If so, I hope I'm there to watch.


I apologize to all senior tennis players if I just armed a few more tennis juveniles with a few new weapons, but you know some of them can't control themselves and this article will do them absolutely no good.

Please enjoy the photo above and others at Top 10 Secret Joys of Tennis.

You may also want to read Don't Sacrifice Your Tennis Game Being an Athlete.

If you're aging (Duh, we all are.), please check out Prime Joint Support Formula.