The phrase has several meanings, for the most part very similar in origin and somewhat the same in explanation - from surprise in someone else’s err, one’s response to one’s own fault, to how to respond to a child whom just fell down.

The Brit’s coined the phrase in most any fashion and this is where the more abbreviated whoops we know today, originated. And, it literally and figuratively came to mind many years ago.


Playing a tournament in the early 90’s (not 1890’s) in Atlanta, it was literally a women’s fashion show on court with all the more vivid clothing colors, matching or coordinated bloomers (I believe they were referred to as such back then). I know things have gotten a little skimpier and form-fitting since then, but one didn’t have to search to notice the array of under-skirt garments being worn that day.


In justification of this, to the untrained eye, plain color compression shorts don’t draw the same attention as multi-colored and funky-print bloomers, at least not for the same reason. Okay, I should have stayed away from this topic, but I am using it to build up to this unusual occurrence.

Exhausted after my match, while waiting to watch my girlfriend’s match, I take in this serious 4.5 ladies doubles competition, noticing all these women came dressed to kill and more than willing to draw blood with their shots.

I had just sat down, so I have no clue what the score was, nor did I care – I just wanted to recover from my match and wait to watch my girl take to court.

Well, the server hits this nice wide and deep serve and the returner hits a set-up shot just about center of the service box and the server takes a few steps in, comes up on her toes and rips it back to the returner while she is recovering. She struck early and high, the ball with all this stop-spin working on it, and it lands a few feet in front of her opponent.  Only partially through her swing, the server’s shot had left her opponent nearly handcuffed.

No one, not a soul, on-court or otherwise, had a clue as to where this ball went after it hit the court.

Her partner was scanning for the ball, laughing while looking behind her partner, along the fence and adjacent courts. The funny part of this is the recipient of this winning shot didn’t have a clue either.

After searching for over two minutes, the returning player (Perhaps she was handcuffed.) realized the ball was in her bloomers, which by the way nearly matched her outfit which was this black, yellow, orange and white daisy pattern she chose to wear that day.

I don’t know if this was a mis-sized garment or what, but whoops-a-daisy, it was up there somewhere and it was hysterical. 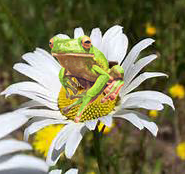 Now, I normally don't pay attention to such things, but that tennis ball had some serious action on it to do what it did.

I mentioned this to Pete and he simply grinned, which is quite rare.

If you have a funny or interesting tennis story, please go to Speak Up! and tell the rest of the tennis world.