Well, I'm not really certain if we are technically done with week one, but I guess as the calendar goes, we are.

So here we go.

One of the Fab Four will have some extra time to watch the remaining three.

Serena is still the top lady and only U.S. woman standing after sending Sloane to the locker room, the stands or wherever, nonepically.

From his hospital bed, Angelo Anderson could see the wheelchair, the cane and the walker with the tennis balls on the bottom.

He told himself he would ditch them one by one to walk out on his own, after bullets shattered the bones in his upper leg and arm in Afghanistan.

This is a wonderful story. Read more >>

EPIC: an adjective not to be used by Sloane Stephens when describing any
upcoming tennis match against Serena Williams, even if used as slang (which is used often by many in a generation which exaggerates most everything and believes accomplishing something is awesome and doing even better is epic)

The tennis community will let one know after such an occurrence, if it was epic.

Nope. It was not. 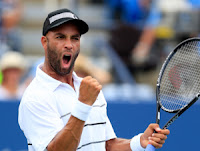 
After formally announcing his retirement (upon completion of the U.S. Open) last Monday, no one got the sense Blake was throwing in the towel in by any sense of the imagination, but unable to completely mask his emotions, someone nearby tossed him a towel.

He ended his professional career on his terms after a five-set loss to Ivo Karlovic of Croatia.

He will always be remembered as a gentleman on court, well-liked on the pro circuit and a player and avid supporter of the U.S. Davis Cup team.

"I don't want to be dragged out of this game. I don't want someone telling me I need to leave," Blake said. "I want to leave on my own terms. I'm happy doing that right now."

Apparently, he will be deeply missed by many, remembered by many more and I hope he stays around the game beyond his retirement from court competition.

Francesca Schiavone was quieted (thank goodness) by Serena Williams 6-0, 6-1 in the first round. I know the obviously audibly noticeable grunting (there's less violent noises coming from the porcelain chamber at a frat hazing) has become more common place, but come on.

Fran obviously has one hell of a professional tennis record, but her "ah-hees", other than reminding me of a 70's marital arts flick, gave cause to recall one of my favorite funniest tennis clips of all time.

The World In Which We Live

Hour-long lines on the way into the US Open

"All a product of newly installed metal detectors the U.S. Tennis Association is making all ticketholders pass through this year before entering the grounds.

"Never seen it like this," said Dorson, who was on hand for the first session of the two-week event. "People are frustrated. For me, it's worth it, because I love tennis."  Read more >>

Unfortunately, and for some awfully insane reasons, this is the new world we live in and I'll keep my sincere opinions to myself for now.

Enjoy the rest of the U.S. Open and hopefully it will be nothing less than epic.