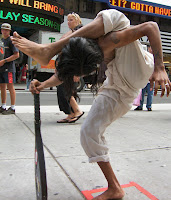 What the heck is this?

I don’t see it often (never in singles play or I would be challenging my own rating) and I imagine I overlook or completely miss it the first few times it occurs on court.

But, what is that awkward stroke, if it can be called a stroke, which some tennis players use, whereas, using a forehand grip, turn the racket head 180 degrees, bringing the racket across the body (I need some graphics here), and then punch, hit, swat (whatever) at the ball?  This is all obviously in lieu of performing a normal and natural backhand stroke.

This is like using your left hand to shift gears in a car (at least here in the ), opening a door with your elbows or cutting (attempting) a steak with the blunt end of the knife.  I don’t get it.  There aren’t enough bad analogies.

I’ve seen some odd stuff out there (usually, just unorthodox), but this one totally baffles me, not so much from the novice, rather from those who have been playing tennis for quite some time - decades. Perhaps this is a way of promoting tennis elbow?

It's almost as silly as the players (servers) who go through all the proper and sound motions of a serve (preparation, toss and back-swing) and then halt their racket somewhere during the upswing, only to do this open-face punch thingy to get the ball in motion.

These are all thingys as they can't be classified as anything else. These are swan dives without the swan, home runs without the home, checkmates without the mate. Would someone strike the ball with the racket handle instead of the head or serve from the fence?

Okay, so this doesn’t go without understanding that this is due to not learning, practicing or possessing a decent backhand stroke, but with all the teaching pros, books, videos and quite simply, enough players who don't employ such technique out there, from which to learn from, please help a friend with eliminating the Inverted Forehand Backhand Thingy from their repertoire.