War in the Land of the Morning Calm 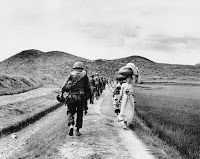 The following was inspired by my father, who served us all and fought in a war rarely recognized. Thankfully he is still living, vibrant and often, my tennis partner.

In addition, I was more so inclined to write about this as I was the thankful recipient of a book (for which my father contributed) accounting for many events and the day-to-day lives of those who were ultimately called upon to perhaps provide the ultimate sacrifice - life.

Jim Campbell took the opportunity and the task of finding so many who had such wonderful stories about the War in Korea, a journey I know dealt with much emotion and self-regret. You can order his book, War in the Land of the Morning Calm, by contacting him at campbell_james@bellsouth.net.

I offer you this, as if I was ever there, knowing I never was, but now understanding what was lived, felt and perhaps most intentionally forgotten.

This is for my father, all who served with him, and all those who have, including the 40 Thousand Souls, and those who will do so again.

40 Thousand Souls stirred as
Thousands of others were left
Tending the scars of war,
Forever wiping away the blood,
Trying to remove the errant shrapnel from the
Hearts and minds of family and friends.

40 Thousand Souls stirred as
My enemy - The one I fought,
Returned to life -
A life probably not unlike war itself.

40 Thousand Souls stirred as
My comrades - both domestic and foreign,
Renewed or began lives so much unlike war.
While others met with the
Everlasting and unyielding memories of battle and bloodshed.

40 Thousand Souls stirred as
A friend or spouse yearned
To understand the one who returned from the war.

40 Thousand Souls rested as
I began to move.
No longer frozen, but still lost in my own,
My own selfish sense of awareness,
Yet, now, forever so aware of the
Hearts and Souls around me.

40 Thousand Souls now rejoiced as
I awoke, realizing all I had done, not necessarily within me,
But called upon me,
Reluctant, yet somehow able.

40 Thousand Souls and
I celebrated, as we saw one another again,
As brothers, and we laughed
And cried,

Yet we never cheered, nor would we ever.

Click here to purchase from Amazon.
Posted by Doug Ingbretsen